The Swedish elections in 2022 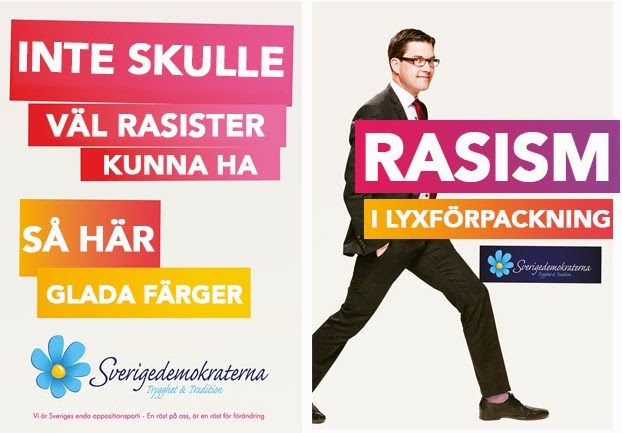 The Sweden Democrats (SD), known as Sverigedemokraterna in Swedish, have built nearly all of their political propaganda on the basis of what they've always held dearest to: xenophobia.

This morning, as I stepped out of a subway cart into the most central of all Stockholm subway stations, I was faced with pink–and–red–coloured propaganda: a huge poster of a house with the text 'Harder punishment(s)', in Swedish.

SD are known for trying to hide xenophobia behind brightly–coloured walls of populism and stupidity. Because history tends to be repeated, especially in our age, SD are now—according to recent polls—the second–biggest political party in Sweden.

Have you ever seen Jimmie Åkesson, the party leader, in live debates against political opponents? He, and most of his cohorts (including other right–wing parties), simply repeat programmed phrases that they're taught by their party brains. The same goes for the lefties. This makes for very repetitive and silly discussions, especially because the party leaders rarely think ad hoc and by themselves. Sure, there's a lot at stake at a public debate, especially tonight, when the final SVT (public Swedish TV) debate between all governmental party leaders is broadcast live.

What currently irritates me most about the right–wing bloc, is that they believe these are the two most important things in Sweden:

Actually, the Swedish healthcare system—as effectively dismantled and privatised almost entirely by the Swedish right–wing bloc—is more important to the people of Sweden than 'law and order'18, but what the hell; when's the peoples' opinions mattered to the elite?

The hypocrisy displayed by SD is vast. I'll show you some examples:

Gang violence leads to deaths. This might sound cynical but isn't: gang violence, annually, leads to the deaths of around fifty people per year. This year, in Sweden, we have seen 47 deaths1, counting up to 2022-09-01. Around 12,000 people die per year from diseases that are directly related to smoking7.

Recently published research2 shows that 59% of all candidates for government (for the year 2022) who are connected to criminal biker gangs are SD members.

151 individual political candidates who have, during the last five governmental elections, applied to join the Swedish government are connected to criminal biker gangs. 58% of these were SD members.

SD are not interested in talking about these statistics.

SD often claim and say that immigrants are responsible for a lot of crime.

SD are not interested in speaking about some crime–related facts, like how SD governmental members were, in 2018, sentenced for crime 36 times more often than governmental members of other parties3. Note: there is no group of immigrants that even comes close to this kind of criminal statistic.

SD are not interested in speaking about how they, together with the rest of the right–wing bloc, want to keep turning Sweden into a bastion of how the ultra–wealthy control the poor4.

Kristersson promised Fried that his party would never collaborate with SD. They now do, and have been doing this for over a year.

The Swedish Economic Crime Authority conclude that economic crime at the very least costs Sweden about 100 billion Swedish crowns per year (roughly 10 Billion U.S. Dollars per year)5; in other words, at the very least 1.8% of the Swedish GNP. This can be compared with the annual cost estimation of refugee immigration6 of 1.0% of the Swedish GNP; remember, unlike economic crime, refugee immigration creates and generates work, which means the cost is paid back.

The right–wing bloc want longer sentences for gang–related crime. They have firmly stated that a criminal who's in jail isn't a threat, which flies in the face of science. Nearly all criminological science shows the importance of not only remodeling a racist and otherwise prejudiced criminal justice system, but caring for persons who've been sentenced, or it will cost society and families a lot of money, not to mention the sheer tragedies that face both the sentenced and victims. For example, see Joan Petersilia's research10, for which she received the Stockholm Criminology Prize in 2014.

Very few governmental parties are willing to follow in the steps of science to steer away from the current climate catastrophy. Now is the time where we see widespread evidence of consequences of our actions: extreme floods throughout Australia13 and India14, temperature records are continuously broken all over the world15, droughts are emptying some of the biggest rivers in Japan16, the polar ice is melting17, etc.

The Intergovernmental Panel on Climate Change states the following, via The Guardian12:

The world can still hope to stave off the worst ravages of climate breakdown but only through a “now or never” dash to a low-carbon economy and society, scientists have said in what is in effect a final warning for governments on the climate.

Greenhouse gas emissions must peak by 2025, and can be nearly halved this decade, according to the Intergovernmental Panel on Climate Change (IPCC), to give the world a chance of limiting future heating to 1.5C above pre-industrial levels.

The final cost of doing so will be minimal, amounting to just a few percent of global GDP by mid-century, though it will require a massive effort by governments, businesses and individuals.

But the chances were narrow and the world was failing to make the changes needed, the body of the world’s leading climate scientists warned. Temperatures will soar to more than 3C, with catastrophic consequences, unless policies and actions are urgently strengthened.

Jim Skea, a professor at Imperial College London and co-chair of the working group behind the report, said: “It’s now or never, if we want to limit global warming to 1.5C. Without immediate and deep emissions reductions across all sectors, it will be impossible.”

Politicians who are not seriously engaging about the climate catastrophe is like being at a fire–fighters conference and not talk about water; those politicians can't be trusted.

The neoliberal agenda that is, in essence, discriminate the poor, both geographically and physically, doesn't work. Ever since the Reaganite and Thatcherite American and English governments together proved this, starting in the 1980s, there's proof outside our kitchen windows of how the ongoing effects have affected many millions of people all over the world, of whom thousands are dying by the hour.

Sweden has since long been a country where social democracy has been the mainstay political power. In my eyes, it's far from perfect, and the Social Democrats are selling off some core values for votes11 .

Now that Sweden is a neoliberal dream, we need to fight that in every way imaginable.

Closing our eyes to science and the climate catastrophe is a simple way to hurl us toward the annihilation of the human species.

Parties like SD will try and get votes by using any political means possible. Check how often they evade and pervert science; this should tell you something apart from facts like how they currently rarely exclude people from their party for extreme right–wing views, such as believing 'the white race are subject to genocide', as Ulf Hansen (personal friend and 'idol' of Jimmie Åkesson, the leader of SD) has stated19, or the simple fact that SD pay a 'troll army' to pervert other political parties and surrepticiously spread propaganda to hundreds of thousands of followers on Facebook20.

There are other ways.

No matter how much we may dislike or loathe some political opponents, we'll use our brains to prove them wrong; let they die by their own sword.

Hopefully, Sweden won't have a new government in a few days. Hopefully, people will be free.

We can hope. And we can act.

A prairie fire can be started by a single spark.