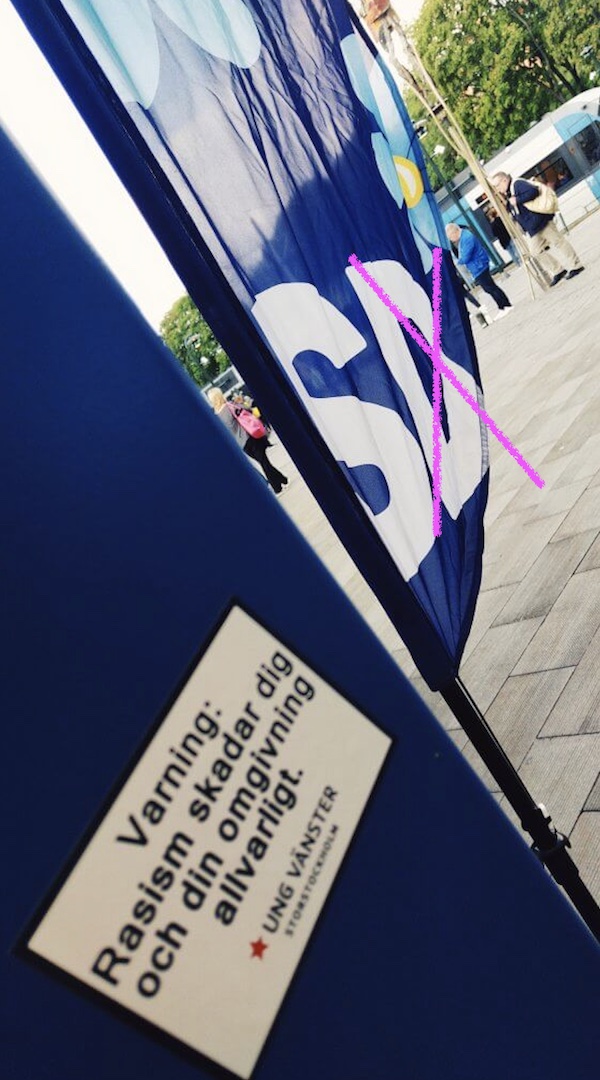 Picture taken in Stockholm, Sweden, in 2018.

Sweden is a singular country.

Not only have Swedes fought their way to universal healthcare and free education, but to freedom from and in religion and the freedom of speech. At the same time, what has helped equality has quickly eroded.

The Swedish Social Democratic party is steeped in liberalism. During the 1990s, it started leaning toward the right and was firmly against NATO.

It's 2022. This year, the Swedish Social Democratic party turned 180 degrees from always having been against joining NATO—although they've gladly sent off Swedish troops abroad to support NATO wars—to fully supporting it.

If you don't engage in terrorism, you have nothing to worry about.

The quote is from Magdalena Andersson, the current Prime Minister of Sweden. She uttered this line in regard to critique against Sweden's concession to Turkey. Erdoğan, the Turkish dictator/Prime Minister demanded1 that Sweden must vehemently oppose Kurdish political parties in order for Turkey to not veto the Swedish NATO membership application. So, Sweden conceded. Charlotte von Essen, the current chief of The Swedish Security Service, has since stated that Sweden should ban pro-PKK demonstrations2. In other words, Sweden is suddenly Turkey's tool. (Remember that Turkey has committed genocide of Kurds.)

In 2021, the Swedish Social Democratic party tried to completely abolish rent control3, but were stopped by the Left Party.

On the last day of July, 2022, Anders Ygeman, Minister for Integration and Asylum Policy, was interviewed by Dagens Nyheter4. In this interview, Ygeman stated that Sweden should create laws to prevent more than 50% of people living in 'troubled areas' from being from non-Nordic countries.

Reflect on this for a moment.

Think some about what this truly entails and could bring about.

Think about the doors that these laws would open. Doors to where?

By the way, the Swedish Police define 'troubled areas' as a geographical region that is characterised by 'low socio–economic status', be an area where 'criminals affect local society', and its denizens 'generally don't want to partake in judicial processes'. There are severe problems with how 'troubled areas' are designated; I'll get to that later.

The Swedish Social Democratic party is swapping its historical core values, such as beliefs in equal human rights, for populist extreme–right–wing ideas. A decade ago, only the Sweden Democrats, the populist, xenophobic, and islamophobic party, would say these things. But—just like Instagram in its recent and highly desperate attempt to become cool and grow again tried to become TikTok—what do core values mean when you can sell out your core base, out of…sheer desperation for more votes? Viktor Klemperer, German scholar, was 52 years old in 1933. He started writing a diary, which he kept doing far after the Second World War. The early diaries are extremely illuminating due to Klemperer's style of writing. He illustrated how angry people rose up and blamed Jews for their own troubles, for having taken their living spaces. For being the root cause of the Real People's problems. The non-people should be shunned, placed to the side, put in tiny, controllable boxes. Klemperer wrote of how daily life in Germany changed little by little. He wrote of how scholarly colleagues were prevented from using certain books to teach their students, not because the books were erroneous, but because they were written or printed by Jews. He wrote of how honourable people stopped yelling at Nazi troops who physically berated the vulnerable people, out of fear that they would be next.

How to avoid being next in line to be hit by the hammer should not be the main problem to consider; The problem itself is what should be resolved.

In Sweden, in 2022, the problem is this: The Swedish Social Democratic party want to use a map of 'troubled areas' to designate where immigrants from non-Nordic countries can live. These 'troubled areas' are, by the way, completely made up by Swedish Police and is heavily criticised5 for just that.

So, a political party now wants to keep certain geographical areas 'Nordic'; please excuse my language, but I'm purposefully being vulgar to prove a point. This is making the Swedish Democrats look cleaner; it will almost certainly help to normalise the Swedish democrats, who are famously xenophobic and incompetent.

First they came for the socialists, and I did not speak out— Because I was not a socialist.

Then they came for the Jews, and I did not speak out— Because I was not a Jew.

Then they came for me—and there was no one left to speak for me.