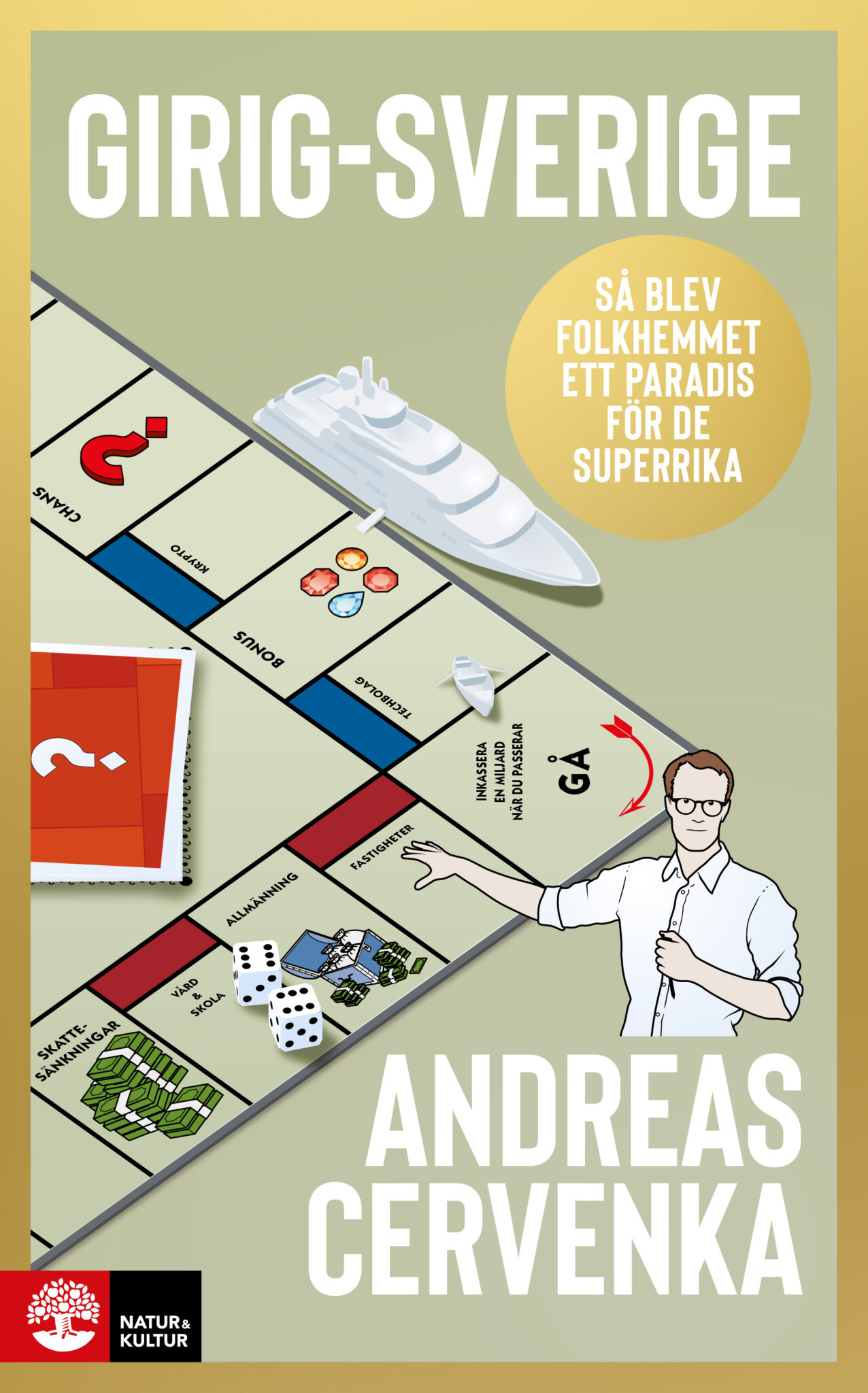 Andreas Cervenka is a journalist working in Sweden. His main focus is economics, a field that I have zero interest in, and yet, one in which I have forced myself to vest interest. To kind of rephrase what Rage Against The Machine sang: know your enemy.

His latest book, released in 2022, isn't yet translated to English. There are currently no plans to have the book translated, which is something that English publishers really should look into.

The original book title is Girig-Sverige: så blev folkhemmet ett paradis för de superrika, which roughly translates as Greedy Sweden: how the people's home turned into a paradise for the ultra-wealthy. The Swedish phrase the people's home is a well-used phrase for a kind of period in Sweden's history that merged socialism and capitalism.

I wish I could say Cervenka's title is exaggerated, but it's not. It sounds harsh, and that's because our current situation is this way. But things can be changed. As Ursula K. Le Guin once said:

We live in capitalism. Its power seems inescapable. So did the divine right of kings. Any human power can be resisted and changed by human beings. Resistance and change often begin in art, and very often in our art, the art of words.

Sweden has undergone extreme change in the last 25 years. Where I guess most people around the world believe Sweden to be a socialist haven, check out this list of changes:

All of this has made Sweden attractive for billionaires and other types of risk capitalists. All of the above would be a dream for the ultra-wealthies of the USA.

The spring of 2021 heralded new times: Statistics Sweden reported that the increase of economic standards for Swedish households 2016-2019 was the lowest since the economic crisis in the 1990s. They also noted that the number of Swedes with low income was 15%, the highest-ever number for this group.

The summer of 2021 heralded new records for the Stockholm Stock Exchange.

Sweden has no remnants of socialism left. Not much, anyway, if you wanna bend most definitions of the term. Education is somewhat free, although there are forces at bay to smash that as well. Healthcare is free, although private clinics pop up and advertise themselves everywhere. A couple of decades ago, both paid-for education and healthcare would have been frowned upon by most Swedes. Today, people shrug and see it as something that's happened, which is how many Swedes react to things: we shrug and move on.

Noam Chomsky, often after having presented dire facts about the world we live in, is asked what one can do about things. He often replies that people who are directly affected don't ask: they act.

In 1992, Fredrik Lundberg was the third-richest Swede. Today, his wealth at that time wouldn't be enough to list him among the 170 richest Swedes.

Nota bene, this is not a clarion call saying it's easier to get rich today than it was in the 1990s. It's significantly harder, and what's usually called The American Dream (class mobility: born poor, traverse class) is nearly impossible in Sweden.

A Big Mac with fries and drink costs 35 Swedish crowns today. I guess the burger alone would cost 25-30 crowns. Let's say it cost 30 crowns in 1996. If the cost of a Big Mac would have followed the trend for apartment prices in Sweden, it would today cost 240 crowns.

The young Swedes who buy their first place to live gamble with a lot higher risk than previous generations. New loans for apartments with super-high prices, based on nothing more than a little money that is scraped up, with your parents as creditors.

Get rich or sue crying

Conni Jonsson, chairperson for the Swedish risk-capital company EQT, was in the spring of 2021 afraid that he'd have to pay more tax than a registered nurse.

Companies like EQT deal in metrics of risk that haven't been seen before. The metrics can be made up whichever way they choose to cut it.

Conni became upset, not because his company always risks losing everything that the people at the bottom own, but because EQT went public; Conni made a profit of 1.4 billion crowns at that point, about 140 million euros. Thing is, Conni sued PWC, a company that had helped EQT. Why? Before EQT went public on the stock exchange, PWC advised Conni to use Qarlbo, Conni's privately owned Luxembourg-based company. for the stock transfer. Naturally, to pay as little tax as possible from his stock profits as EQT went tradeable.

Conni sued PWC because his total future profit could have been 3.5 billion crowns, but due to PWC advice, he would only have 3.2 billion.

All of this has happened in the past 25 years.

When Ruchir Sharma, chief strategist for the investment bank Morgan Stanley, in the spring of 2021 used the Financial Times to show how the wealthiest individuals on Earth had made it through the pandemic, he compared the wealth of every Dollar billionaire with the size of the gross national product of the country they 'belonged' to.

Swedish Dollar billionaires have accrued wealth that is nearly 30% of the Swedish gross national product.

There are 41 Swedish US Dollar billionaires. There might be gaps in Sharma's calculations.

Sweden consists of ten million people. There are 41 people who own 30% of what we produce during a year.

The difference between the rich and the poor is a gap that is widening in Sweden. It's actually widening so rapidly, that Sweden has the biggest-widening gap between rich and poor in Europe. Since years back.

Sweden is a 'rich' company. But the wealth is distributed extremely unevenly.

The richer you are, the more your salary is likely to increase, year-to-year. This is fact in Sweden.

EQT was mentioned earlier. They work to yield money for Swedish pensioners, who can place their bets with EQT or any other company that trades with risk and money in the same way. Your pensions can increase or decrease depending on their moves.

The Swedish state also work to yield money for Swedish pensioners, in the seventh AP fund. The difference between the people who for the Swedish state and EQT is that the later ones earn thousands of times more money. This is no exaggeration.

Stanley Druckenmiller once said 'Don't confuse genius with a bull market.' He warned people not to immediately think a strongly-increasing market has anything to do with intelligence. Just look at crypto currencies, or the 2008 financial crisis, which will repeat itself.

In Sweden, you can take the subway between areas where the price-per-square-meter increases/decreases sixfold.

People take insane loans to get what they want. To buy a one-roomer in Stockholm city today, you have to be able to bring half a million crowns in cash and a monthly salary of at least 46,000. If you earn that much per month, 30% of it will be eaten up by mortgages and amortisations.

And these prices are shot up because of how a handful of people want to make more money when they already have hundreds of millions of crowns, if not billions.

Sweden is being controlled by greed, and the ones who are affected by this control are the people who are not in control.

Read Andreas Cervenka's books. They're deeply illuminating. Cervenka's poetic and satirical tones help even someone like me, who's never liked reading about economy, to not only laugh, cry, and get mad, but to genuinely want to change things and take steps toward achieving just those changes. In some ways, Cervenka is a rabble-rouser, and Bog knows we need more of those at this point in time.