Rebecka Fallenkvist and the Sweden Democrats' mockery of justice

Rebecka Fallenkvist, one of the main persons behind the Sweden Democrats' youtube channel and for paraphrasing the most well-known Nazi salute on the evening of the latest Swedish elections, has now been booted from the party1.

What she now has done is 'reprehensible', according to Jimmie Åkesson, party leader of the Sweden Democrats. He didn't say this about her Nazi salute, so, what has she done this time? 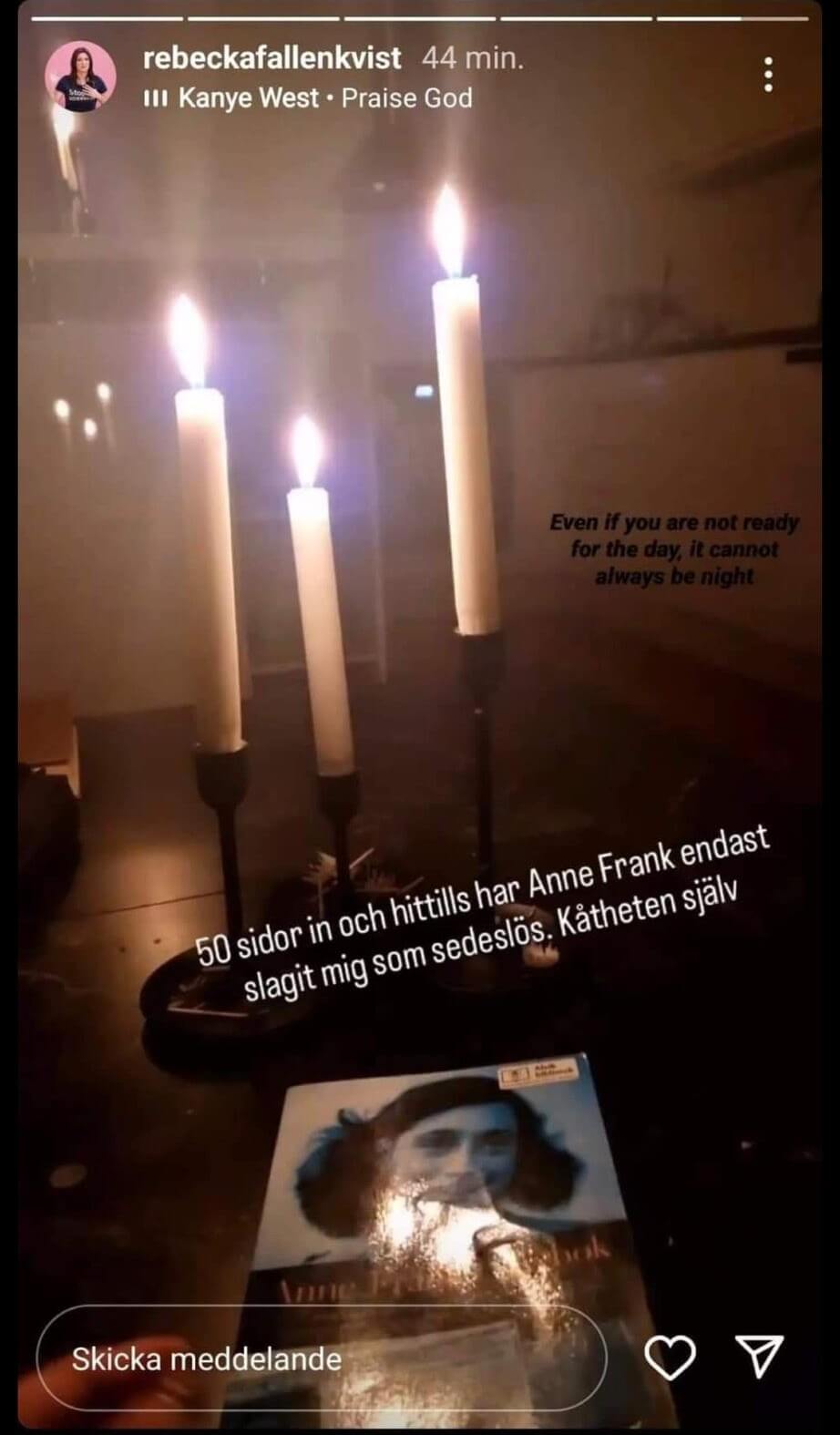 She posted a picture of Anne Frank's diary with the text (my translation):

50 pages in and so far Anne Frank only strikes me as immoral. Horniness itself.

This is plainly a mockery of justice by a party that deserves no votes.

The Sweden Democrats once claimed 'zero tolerance' for racism and antisemitism. This is, as recent history has shown, a sham.

Just look into how Ulf Hansen, Jimmie Åkesson's 'idol', friend, and party colleague, who has openly spread conspiracy theories of how the 'white race' is subject to genocide2.

A few days ago, Richard Jomshof, Secretary for SD, was interviewed by a Holocaust denier in his studio3:

Some people even believe we're Nazis, that we're extremists.

The quote is from Jomshof.

A few days ago, the new Swedish government party leaders presented their new view of Sweden4.

The view contains the word 'vandel', an ancient word which means 'behaviour' or 'way of life'.

The view explicitly states that people will be deported because of their 'behaviour' or 'way of life'.

This is just what Nazis did as they took command of Germany at the cusp of starting World War II.

How the government of Israel try to annihilate Palestine6.

Remember William Petzäll. He used to be a high-up in the Sweden Democrat organisation, until he started abusing drugs and was completely shunned by the party. He died from drug abuse.

Jimmie Åkesson has confessed to being addicted to gambling.

There's no rationale behind the Sweden Democrats. There's no justice. They treat their own members like trash and don't care about anything but power for the higher-ups.

What do we do?

First they came for the socialists, and I did not speak out—
Because I was not a socialist.

Then they came for the Jews, and I did not speak out—
Because I was not a Jew.

Then they came for me—and there was no one left to speak for me.