The day after the Swedish elections 2022 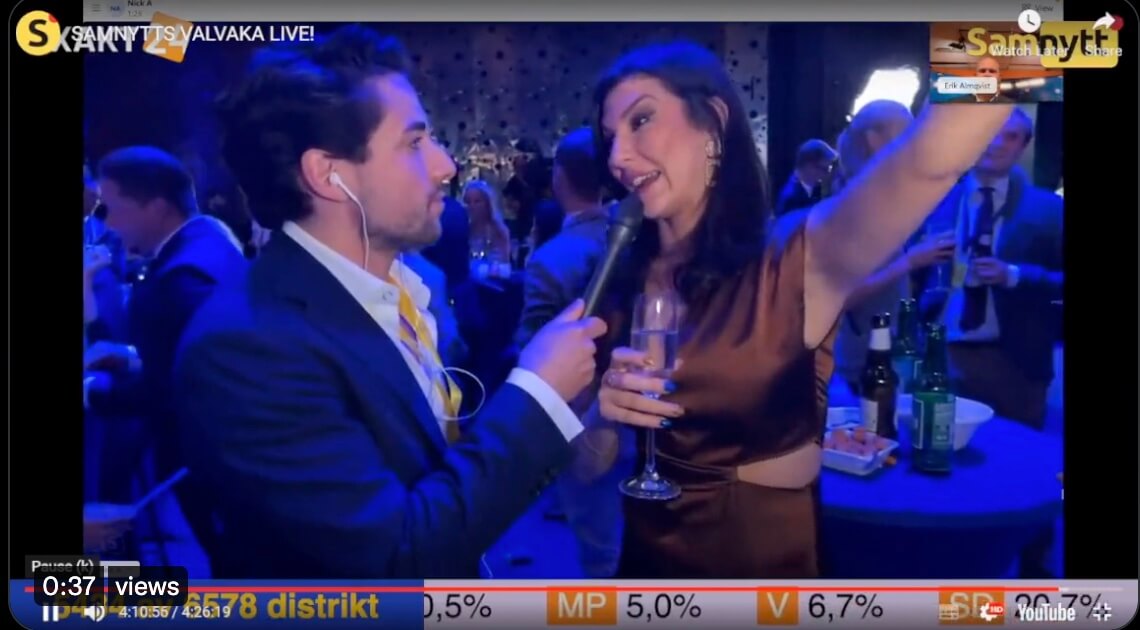 The Swedish elections are nearly over.

Unless pre-election votes adjust the final score, the right–wing bloc will take majority power over the Swedish government for the next four years. As I'm writing this, there's an extremely small number of votes that differ between the two main Swedish political blocs.

If the right–wing bloc do get power, it will be highly volatile. The Sweden Democrats (abbreviated 'SD', now the second-largest political party in Sweden) will depend on the Liberal Party (L) for help. SD and L are constantly at loggerheads on a plethora of topics. It will be very hard for them to agree on points.

Last night, an intoxicated Rebecka Fallenkvist, one of the main people behind Riks, the official youtube channel of SD, said 'hel-g seger' on a live video feed4. This is play on the term 'hell seger', which means 'hail victory', a Swedish translation of 'sieg heil', the German Nazi salute. Fallenkvist also stated that she didn't care about the Nazi roots of SD, because that 'happened before I was born'.

SD, as always, sweep this under the rug. One of their big champs says sieg heil on TV. Not a big thing.

In a few years, if Sweden moves in our current direction, SD won't have to hide anything.

Something that was revealed just before the election is the fact that SD used an army of fascist trolls1 to spread lies about political opponents and to direct public opinion. The troll leader was initially Jacob Hagnell, who was revealed to anonymously have spread racism and therefore got 'kicked out of SD', but in fact worked and still works for them3, currently as chief of Riks, together with Rebecka Fallenkvist.

Hagnell listened to 'Comrade the Voices'2—the British fascist version of the Nazi party anthem, 'Horst-Wessel-Lied'—while he modelled and controlled the SD troll army. The troll army was fashioned after Nazi Germanic and Trumpian ideals.

The troll army often directly acted on orders from the SD party leadership.

The troll army was ordered to attack the Social Democratic–led government; SD–friendly sites such as Samhällsnytt published related information online, in synchronisation. The aforementioned ETC article details information from a troll-army insider who reveals how they, for example, used multiple SIM cards to push out lies through Facebook and other social media platforms.

The leader of the Moderate Party (M), Ulf Kristersson, once promised Hédi Fried, Holocaust survivor, that M would never collaborate with SD. He broke that promise and today M are the third-biggest political party in Sweden. Their power wanes. We've seen this power cycle before5.

A few days ago, Richard Jomshof, Secretary for SD, was interviewed by a Holocaust denier in his studio:6

Some people even believe we're Nazis, that we're extremists.

The quote is from Jomshof.

Some will likely argue that this election was stolen by SD. It's as of yet too early to say, but it is early enough to say this: a party that has democracy in its name and whose leaders order misinformation and lies to be spread about their opponents don't deserve votes.