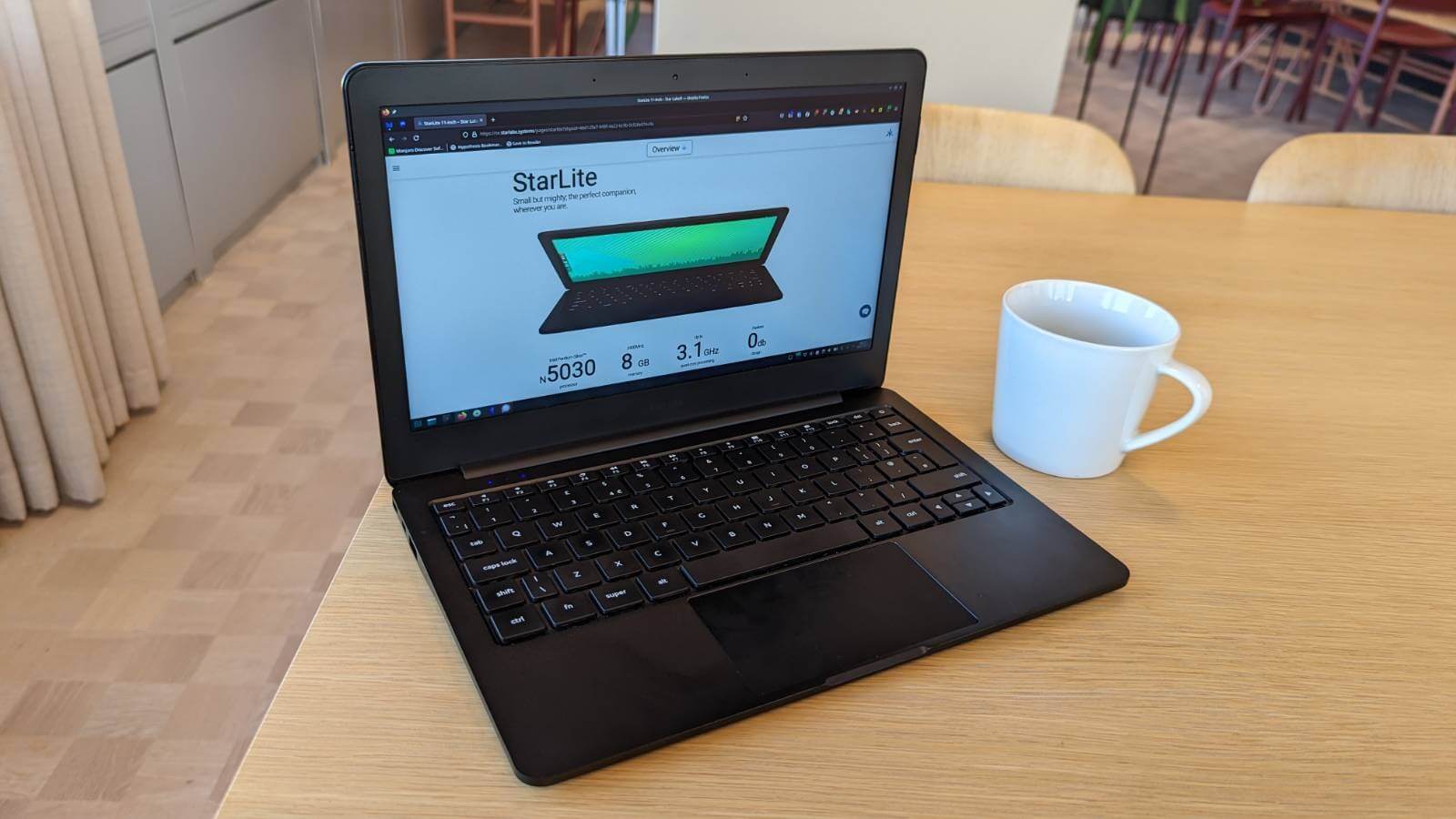 Well, here we are. I'm writing this review by using the Starlite Mk IV, the latest version (now around a year old) of the smallest computer from Star Labs, the English company formed in 2016 to make computers that can run Linux (and Windows, actually).

I've already reviewed the Star Labs LabTop Mk IV, which, at the time, was their powerhouse. I'm a writer who dabbles in software, not a developer nor a video editor, so my computers don't have to be equipped to the max.

So, what's my setup?

What's in the box

Apart from the computer, there are four things in the box:

The Starlite come with a power adapter and a cable. The adapter is smaller than the one that comes with the LabTop. Strangely, the cable that runs from the adapter to the computer is a 3.5 mm connector rather than the USB-C cable used by LabTop. This feels old. The cable is detachable from the adapter, which is good.

Also, the computer can be charged via USB-C.

Same as with the LabTop: one polyester flap to put between the keyboard and screen before closing the computer and one sleeve into which you put the computer.

The sleeve won't save your computer from anything other than dust, so if you plan to travel, invest in proper casing.

The Starlite is considerably smaller and actually a tighter build than the LabTop. By tighter, I mean the keyboard fits more snugly1 and the screen and keyboard part of the computer feel like one single unit rather than two slightly more brittle parts that happen to stick together.

The edge that you rest your wrists on while writing feels sharper than that on the LabTop. Actually, the Starlite's edge feels metallic while the one on the LabTop feels more plastic. This is not a gripe: I have no problem with this.

Also: the computer weighs next to nothing.

The included 8 GB RAM is the maximum that the Pentium N5030 processor can address. I've no problems with the amount of RAM as I'm not using virtual machines, building software, and I definitely don't have a million tabs open.

I love how the keyboard keys travel when using them. The ones on the LabTop actually move a tiny bit horisontally when writing, which I consider a flaw. These ones are very nice. The Enter key doesn't wobble, which it does on the LabTop (and has done from the very start).

The keyboard is backlit, perhaps a tad more evenly than on the LabTop.

The trackpad is wonderful for simply pointing and one–click selecting stuff. It's actually excellent for those use cases. The trackpad is made of glass and is great most purposes. However, there have been touchpad issues; see the

The display is matte and works very well in direct sunlight; I'm actually writing this as the sun is going up right behind me. Even as the display is showered in sun, I've no problems in seeing what I write.

Speaking of the display, its bezel is noticable. I mean, I expected it to be. It's a dated touch, but still. I mean, I'm happy with the screen. It's 11 inches; I'd be a fool to expect anything different. It's just a change of scenery.

One thing that I love with the LabTop is the ability to open the display so that it's level with the keyboard. I mean, I can push the display until it touches the table on which the computer is standing. This is not possible with the Starlite; the screen tilt level on the Starlite is fine for me.

The computer is fanless. This is absolutely brilliant for me. The computer does get a little warm from time to time, but this is not an issue. I much prefer this than the constant high–pitched noise that the LabTop makes for me (even though Star Labs's support department have helped me to troubleshoot this and I've used their coreboot-configurator to set the fan sound level to 'Quiet').

Battery life: perfectly acceptable. I've used the machine for around a month so I can't say anything about battery–life longevity, but if it's comparable with that of the LabTop, I'll remain content.

You get one port each of these flavours:

The not so good

The machine is so small that holding your hands together to type causes the bottom parts of my hands to accidentally hit the touchpad from time to time. For example, this has deleted swathes of text to be deleted and caused concern that I could, at any time, accidentally delete stuff.

I've had a much harder time with selecting bigger chunks of text, or selecting something that covers more than half of the screen, on the Starlite than on the LabTop.

I hold down my finger on the trackpad and feel the subtle and expected click that indicates that I can continue pressing the finger and moving it across the touchpad. As I move my finger, the trackpad either clicks again or just loses touch, hence, creating a selection that wasn't intended. Even worse, this problem could cause moving files to be dropped in the wrong folder, or other, unintended and risk–laden effects.

Using a mouse works just fine. It's just that I'd like to be able to use the trackpad for things like selecting things larger than a stamp or moving files without risking catastrophe.

Note: I have no trackpad issues with my other computers, including the LabTop.

About my trackpad issue, Star Labs says this:

The touchpad operation may differ from distribution to distribution. The features that you appear to be missing are 'disable whilst typing', 'tap to click' and 'multi-touch' support which the hardware does support.

For 'disable whilst typing' This would pause the input on the touchpad for a period of time when a key is pressed and then resume after that pause period. If the feature is not easily enabled/visible via the GUI, then the 2nd option could be to press the F10 (fn + F10 if function lock is in use) key to temporarily 'disable the touchpad'.

I'm using Manjaro Plasma. Everything is snappy and I've no problems in using any software. Easy, peasy. Watching HD video works well for me, hopping through twenty browser tabs is nice.

One thing that bothered me was that shutting down the laptop ultimately required me to hold the power button until the lights went off; this somehow was fixed by installing and running the new 6.0 version of the Linux kernel; at least, that's what I think solved the problem.

This is a nice little computer to use for writing. I've now used it for a few weeks and subconsciously now twist my wrists a bit to not accidentally select and mess with text. That's good, I suppose.

The machine does get a little hot from time to time, when chugging CPU (for example, when updating software), only in the lower left-hand part of the hardware. It cools down fairly quickly after a power-hungry session is finished.

Would I recommend this computer to people? Yes, I would. It's small, simple, works right out-the-box, Star Labs' support staff are excellent (actually miles better and beyond what you find with companies like Microsoft and Apple), the build quality of the computer is sturdy and nice, and very light in terms of weight (note: the LabTop is also very light).

Get this computer if you want a small Linux computer that doesn't require a lot of computer power.