Doublespeak: the Swedish right-wing bloc vs the climate catastrophe

George Orwell coined the term 'doublespeak'1. In politics, this can be more specific:

Edward S. Herman and Noam Chomsky comment in their book Manufacturing Consent: the Political Economy of the Mass Media that Orwellian doublespeak is an important component of the manipulation of the English language in American media, through a process called dichotomization, a component of media propaganda involving "deeply embedded double standards in the reporting of news." For example, the use of state funds by the poor and financially needy is commonly referred to as "social welfare" or "handouts," which the "coddled" poor "take advantage of." These terms, however, are not as often applied to other beneficiaries of government spending such as military spending. The bellicose language used interchangeably with calls for peace towards Armenia by Azerbaijani president Aliyev after the 2020 Nagorno-Karabakh War were described as doublespeak in media.

I believe that Sweden is bound for the same assault on the media as what the USA face since the 1970s: a simple and easily reusable way to paint the world in the colours that their advertisers and owners see fit.

This world view isn't about climate change. It serves corporate interests to maximise profits. That's all there is. This is what drives capitalism: greed. We know that greed is highly intoxicating.

Do we believe the most environmentally destructive companies on the globe will stop and say 'let's save the environment even if it'll cost us'? Imagine the CEO of ExxonMobile, Rex Tillerson, saying that at a shareholder meeting. They'd kick him out of the room.

So they lie to us, while saying their pitiful cuts will save the globe. This is corporate doublespeak. 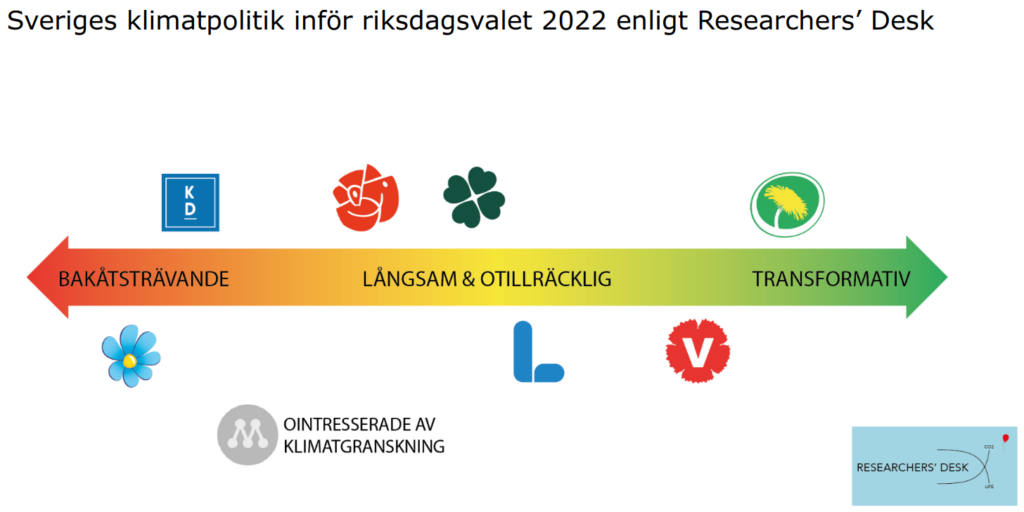 A recent publication2 shows how the Swedish governmental parties stand on the climate; note that the Moderate Party (M) are not in the research results, simply because they refused to partake. The image above shows that the Sweden Democrats (SD) and the Christian Democrats (KD) strive to go back in time, meaning they're destroying the climate.

Of the seven parties surveyed, five parties proposed policies resulting in lower emissions than those allowed if Sweden were to reach carbon neutrality by 2030 and fulfill the Paris Agreement, with the green party (Miljöpartiet) proposing the most ambitious reductions. This chart shows many different aspects. Green means top marks, yellow is middle, and red is the very worst.

The lines in the image are, from top to bottom:

As we can see, KD and SD are at the very bottom.

M won't be far away from those two parties.

All of these parties have claimed that they will save the environment from destruction. SD won't do this by acting other than a) give money abroad because others are mainly the cause of the problem and b) Sweden has so much good technology, and let's build on that rather than do anything else. These are words I heard Jimmie Åkesson (the SD party leader) say during the last week of pre-election debates.

The right-wing bloc in the Swedish government is hell-bent on driving our climate further into the ground, much like the Republican party in the USA.

For more information (in Swedish) on how the Swedish political parties speak out on climate issues, see recent research by the World Wildlife Foundation3.

What can we do?

We must be critical of what the major news outlets tell us4 and actively think.

We can't accept doublespeak from the politicians in power. We must speak out against this, always. This even goes against any kind of anti-intellectual talk that we hear at work. People who claim the climate catastrophe can be taken care of later, work against the news, against organisations like the IPCC, they must be met with fact. And an intellectual battle must start.

If we don't, consider the alternative.

We must act: write our politicians, protest, send information to those responsible, who can make change. Remember, a prairie fire starts with a single spark.

It's easy to be complacent. It's hard to break through, but the easy way won't win this for humanity.